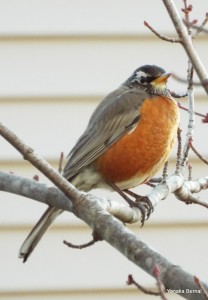 Besides just loving the Robin’s scientific name, Robins are birds that I see frequently. I took these pictures in my backyard where we have several pairs that come and go throughout the year. They nest and seem to enjoy full and productive lives.

Having grown-up in South America, but having attended an American School, I was so amazed by several things that actually did happen in the United States. First, I had never actually seen the trees change colors in the fall. I was born in 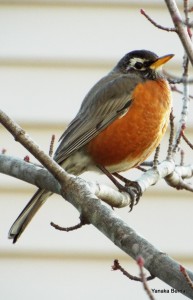 Texas and attended kindergarten in Houston. The leaves on trees in Texas turn brown and then fall off. The same was true for leaves and trees in Bolivia.

I was amused and convinced that my kindergarten teacher was crazy for making us color pictures of red and yellow leaves. What did I care? I was in kindergarten and I was coloring. Who cares if the teacher did not know a thing about what leaves actually did. When we moved to the North East, I was blown away by the fall. The leaves actually did change colors and fell off the tree.

The second thing was the saying about Robins being the harbinger of spring. I was amazed that Robins did, in fact, herald in the spring. I distinctly remember learning that Robins were the harbingers of spring in Bolivia. Again, we had a rainy season and a dry season but little else to call a spring. As far as I recall, there were no birds named Robin around anywhere in Bolivia.

So, here is my backyard Robin all puffed up from the cold, telling me that spring is on its way.