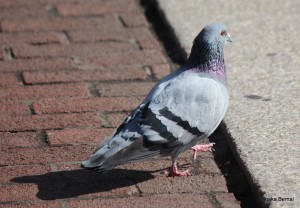 Birders and scientists may call this a dove but its still a pigeon to me. Now its call a Rock dove.

I took this picture when I took my son to Baltimore for a project and found this fellow enjoying the Inner Harbor.

The Rock Dove is indigenous to the Middle East and was introduced the world over. It is all over the place. When I worked at a chemical plant, we were always plagued by these birds. Their droppings are carcinogenic.

In Boston, after the Big Dig removed miles and miles of elevated roads, thousands of rock doves were displaced. The rock doves started dive bombing pedestrians in competition for food. The City of Boston hired a couple of hawks and the rock doves found homes elsewhere.