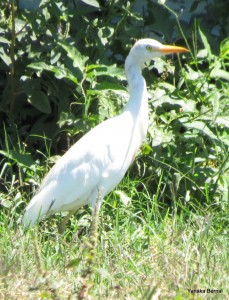 The women I met at Supawna told me to where to look for cattle egrets – “Go to Quinton, New Jersey,” they said. And they were correct.

We drove by some cattle and there were egrets standing on top of  the cows. That clued me in that I had found the correct birds. I did not see them until we had passed a safe place to turn off. So we continued up the road a bit and this is where I saw a couple 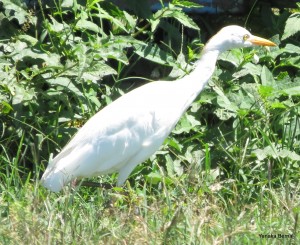 of other cattle egrets. I tried to take a picture of the bigger group but they were not having any of it and they flew off except for this one and here it is.